Things to Do in Huddersfield

Huddersfield Town Centre is a large market town within the Metropolitan Borough of Kirklees, in West Yorkshire, England, 190 miles (310 km) north of London, and 10.3 miles (16.6 km) south of Bradford, the nearest city. Huddersfield is near the confluence of the River Colne and the River Holme. Located within the historic county boundaries of the West Riding of Yorkshire, according to the 2001 Census it was the 10th largest town in the UK and with a total resident population of 146,234. It is the largest urban area in the metropolitan borough of Kirklees and the administrative centre of the borough. The town is well known for its important role in the Industrial Revolution, the birthplace of rugby league and for being the birthplace of the late British Prime Minister Harold Wilson.

Huddersfield is a town of Victorian architecture. Huddersfield railway station is a Grade I listed building and was described by John Betjeman as ‘the most splendid station facade in England’ second only to St Pancras, London. The station stands in St George’s Square, and has been given a £1 million make over and subsequently won the Europa Nostra award for European architecture.

Our Hotel Cambridge Hotel, is situated 0.5 miles from town centre, in a walking distance of 5 minutes. The nearby locations also include a train station, bus station and Huddersfield University.

The station is situated on St George’s Square, which was refurbished in 2009. The square has been fully pedestrianised and parking is now available near by Brook Street.

A free shuttle service, named the Huddersfield FreeCityBus connects the railway station with the bus station as well as the University of Huddersfield and other areas of the town centre.

The John Smith’s Stadium is home to Huddersfield Giants RLFC and Huddersfield Town FC. Additionally, it is a regular venue for international rugby league matches, hosting Bradford Bulls’ World Club Challenge matches as well as several semi-finals of the Challenge Cup. When there is not a sporting event, the stadium is used as a concert venue. 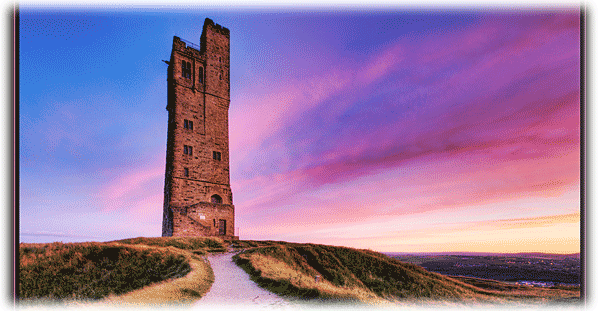 Castle Hill is a Scheduled Ancient Monument situated on a hilltop overlooking Huddersfield, in the Metropolitan Borough of Kirklees. It has been settled for at least 4,000 years. Experts regard it as one of Yorkshire’s most important early Iron Age hill forts.The summit of Castle Hill is by far the most conspicuous landmark in Huddersfield. The Hill has been a place of recreation for hundreds of years and the easily discernible remains of past occupation have made it a subject for legend, speculation and scientific study.

The University of Huddersfield’s roots go back 160 years but its sights are firmly set on the future of its students, and it has close links with industry, business and the cultural community. Courses are modular, with a strong vocational emphasis. Emphasis on work placements in almost all courses has resulted in exceptionally high figures for graduate employment – the university is now 16th in the Unistats league.

Huddersfield is a pleasant town with an expanding social scene, thanks, in large part, to the 24,000 or so students who make up the university. The campus straddles the old canal and there’s a continuing programme of investment in facilities for students. Recently completed is a £17m business school and, over the next 18 months, the university plans to invest £58m in facilities including a new sport, learning and leisure complex, and improvements to teaching, learning and research space.

The Pennines are a low-rising mountain range, separating the North West of England from Yorkshire and the North East.  Often described as the “backbone of England”, they form a more-or-less continuous range stretching from the Peak District in Derbyshire, around the northern and eastern edges of Greater Manchester, through the Yorkshire Dales past the Cumbrian Fells to the Cheviot Hills on the Anglo-Scottish border. North of the Aire Gap, the Pennines give out a western spur into Lancashire, the Bowland Fells, and south of the gap is a similar spur, comprising the Rossendale Fells and West Pennine Moors.